“Made in China” The City of Dafen

Dafen (Chinese: 大芬社区; pinyin: Dàfēn Shèqū) is a suburb of Buji, Longgang, Shenzhen in Guangdong province, China. In the early 1990s a group of about twenty artists under the leadership of the painter and businessman Huang Jiang took up residence in this town. They specialised in the making of large numbers of replicas of oil paintings by masters such as Van Gogh, Dalí, da Vinci, Rembrandt or Warhol[1]

These replicas were sold in many countries for relatively low prices. The endeavor was quite successful and the demand for replicas increased. In order to fulfill the demand more and more artists took up residence and started to make a living, the estimate (2006) being in the thousands.

Many of the artists are trained at art academies in the required techniques and produce dozens of replicas daily.

The official policy states that these replicas are of paintings of artists who have died more than seventy years ago and consequently out of copyright. An obvious exception to this would be Andy Warhol (cited above) who died in 1987, and Dalí, who died in 1989.

The only requirement is that it is made clear that these paintings are replicas. Currently, the village sells both originals and replicas. It is possible to commission paintings for low prices. The village is a gated development, recognizable by the large sculpture of a hand holding a paintbrush outside its gates. 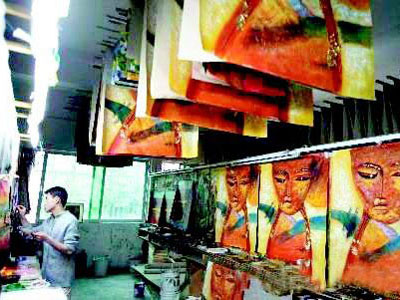